A birthmark is a splotch on the skin that often varies in shape, size and colour from one person to another. However, one thing that is common with all birthmarks is that they are usually harmless and may disappear on their own. Some of the birthmark types might be on a body part that is not easily visible while others might be on your visible body parts like face, neck or arms. The latter scenario is not good for some people as they feel self-conscious about it.

There are several different birthmark types, and most of them are quite common ones. Let’s have a look at some. Birthmarks are classified into two main categories, and all the birthmarks fall either of these two categories. These are – vascular birthmarks and pigmented birthmarks
Vascular Birthmarks
• Salmon Patch or Stork Mark – In this birthmark type, patches of red or pink in colour appear on an infant’s forehead, face or around the neck area at birth. Almost half of newborn babies have this birthmark and therefore, is quite common in infants.
• Infantile Haemangioma – These are usually characterized by red raised marks on the skin, and are more common in girls. Also known as strawberry marks, this birthmark is formed deep inside the skin – giving the skin a blue or purple colour.
• Port Wine Stains – Mostly formed as red or purple marks, this birthmark type is quite rare in babies and is permanent in nature. Port wine stains are often found on only one side of the body and become more noticeable during puberty or pregnancy. 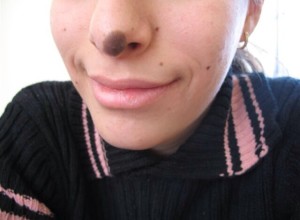 • Café-au-lait spots – Mostly coffee-coloured, this birthmark type is formed in patches, and the number is limited to either 2 or 3 marks. However, if you notice that your child has more than six spots, you should consult a dermatologist immediately.
• Mongolian Spots – These spots are characterized by bluish gray colour and are present right from the birth. The Mongolian spots are more common in people having a dark skin than others and are formed especially in the lower back area of a child’s body. These spots disappear after a few months and by the time your child reaches four years of age, all spots will disappear completely.
• Congenital Melanocytic Nevi – These birthmarks are also known as congenital moles. This birthmark type is quite common in infants and is mainly caused due to overgrowth of the pigment cells in a child’s skin. These marks become smaller with every passing day but may become dark in colour or become hairy during puberty.

Before going any further, get in touch with us to consult HP Dermatology Centre specialists today and get a personalised advice related to your birthmark.